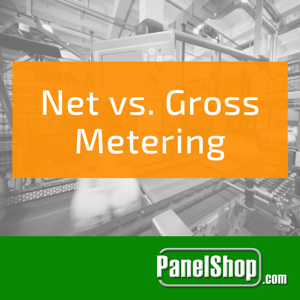 Over the past decade, renewable energy systems have deeply penetrated into low-voltage level systems. Roof-mounted PVs are a common sight in most countries, developed and developing, giving users a secondary source of power. Due to the advent of these technologies, the conventional tariff system has also undergone several changes, through legislation or otherwise. Two terms that have been coined as a result of the ongoing renewable energy diaspora are Net Metering and Gross Metering.

Let’s take a look at the fundamental differences between the two terms:

With net-metering, connections are made in a manner that allows only surplus to be sold to the grid after the building’s own electricity demand has been met. This can be carried out through an intermediate battery system and analysis of the consumption pattern. Once established, the battery can be used as a buffer for the generated electricity to meet the needs of any fluctuated demands.

In gross-metering, the PV system has direct connection to the utility grid, with the entire output being transferred to the energy retailer.

In net-metering, both the import of energy as well as solar power generation needs to be measured. This illicit the need for two meters, a bidirectional and a unidirectional one.

A similar scheme is used for gross-metering, with the bidirectional meter measuring the solar generation while the unidirectional one measures the import of power.

At the end of the day, the consumer is also a business owner who would want to run the PV system at a profit before the lifespan expires. Both net-metering and gross-metering require a Power Purchase Agreement to be signed between both the consumer and the retailer.

The profit margin depends on the tariff scheme being followed in your country. Most countries have given way to hourly tariffs so that peak-load shavings can be carried out easily. Considering that a dynamic hourly tariff is being followed by the retailer, Gross-Metering would mean that the earnings would be greater during peak times, and smaller during average loading conditions.

However, net-metering gives consumers the added benefit of storing their energy and consuming it during peak-times. This essentially means that the consumer can avoid peak-factor tariffs and make greater net earnings as the feed-in tariff for solar power is less than the electricity-purchase tariff, unless of course a disaster occurs within the power system.