The Evolutionary Nature of PLC 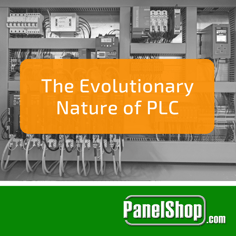 The evolution of automation hardware, specifically the Programmable Logic Controller (PLC) has followed a gradual timeline, and has shown how features adapt to cater for advanced requirements. The past decade has seen the demise of several third-party software developers who created programs for hardware vendors. Still, several vendors still think automation resides within a box rather than within distributed components, which is keeping the pace of evolution in check.

But what about the mighty PLC, which has been the cornerstone of automation for decades? Has it evolved as well?

When the PLC was invented, it held little sophistication and had a fraction of features it has now. Quite importantly, it was extremely expensive at the time. The PLC grew a lot over the decades but at the core followed the same definition of being an electronic device with programmable memory, I/Os and a power supply, which executes user-entered instructions. It was almost like a computer, but also required a programming device to get the addresses coded right.

PLCs were used to control discrete, process-control applications and as the sophistication increased, the lines blurred and it became a full-blown automation controller. The price/performance rations changed drastically as well, with the current PLCs being 30 times better than they were 10 years ago. The major reason behind this was the advancement in technology to such an extent that electronics became cheap in a wholesome rather than a selected manner.

At the same time software evolved as well. When Windows 95 was introduced, it brought with it a whole new era of computer-based programming, and shrank development time by hours.

With the passage of time, the pattern is becoming clear; PLCs are evolving into appliances, and like many others, it also needs internet connectivity to reach maximum performance. The evolution of PLC has also given way to another device, the Programmable Logical Controller or PAC.

PAC is by definition a PLC, and holds everything that a PLC does. They have the ability to handle discrete, drive, motion and safety control applications, from within a common platform. All such tasks were performed by PLCs 10 – 20 years ago. But evolution has played a huge role in the development of PACs. Integration of components & functionalities, and the creation of a dedicated box simplified a number of on-site problems for engineers such as addition of axis of motion. This is why PACs have become a parallel automation technology, and in some ways taking over PLCs, primarily as they provide greater ease-of-use and simplify things that are way too complicated in the latter.

Start a conversation with us, speak to an expert today!

You May Also Be Intestested In Reading: