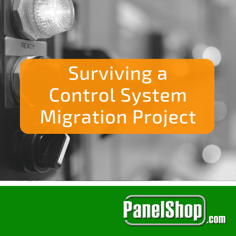 A proactive approach is gaining popularity among companies who wish to keep their automation infrastructure up to date. Waiting for end-of-life to approach simply erodes the competitive edge of a company giving room for others to grow and takes away prospective business. Plant managers simply can’t afford this, and thus can’t adopt a wait-and-see attitude when it comes to adding automation assets.

The lifetime of electronic components is rapidly shrinking, something that requires frequent software & hardware updates. If too much delay is created, other factors can also set-in, such as difficulty in finding personnel qualified to troubleshoot & repair primitive faulty equipment. The ARC Advisory Group stated in its 2015 report Distribution Control Systems Worldwide Outlook that almost $65 billion worth of automation systems are nearing their useful life cycles. It is even more astonishing that over $12 billion worth of such systems were installed in the late 1970s as distributed control systems.

Companies need to carry out the same concentrated effort on their automation systems with which they usually treat their IT infrastructure, always making sure it as at par with the latest advancements. Failure to address automation challenges can lead to problems such as unplanned downtime, unsafe operations and a higher replacement cost for discontinued product lines.

Companies should always be working on determining the best time for migration, as well as the migration path, using proven approaches and detailed cutover plans. The trend of ‘on-process’ control system migrations is swiftly taking over that replaces existing user interface with modern functions, while retaining the system’s original controllers, field connections & devices, in essence, running the new system in parallel with the old one.

Automation suppliers & end users can work together and devise mutually beneficial situations, without compromising high initial investments. In addition, they can extend long-term support to maintain intellectual property in advanced control, facilitating a smooth transition from age-old systems to latest automation ones.

Migration alternatives that can be acted upon by companies include:

If control system migrations are planned properly, industries can ensure zero downtime within their systems while a new, more reliable & productive automation system can be put in place.

Manufacturers that are reliant on process control systems can greatly benefit, economically, from modern technological advancements, that connect businesses with people. By migrating to modern control systems, facilities can integrate real-world business data with their industrial machines, achieving greater operational efficiency, reliability and reduced risk, as well as a higher RoI.

Following migration, some control system suppliers even provide support programs, offering agreed service levels, something that minimizes risk of failure. In addition, this shared risk & reward approach reduces the total cost of ownership, and encourages more companies to jump onto the upgradation bandwagon.