All-In-One Panels vs. PACs: Which is Right for Your Application? 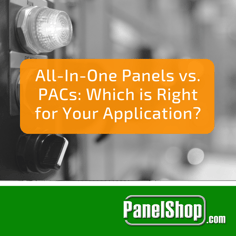 Original Equipment Manufacturers (OEMs) have standardized and almost perfected a charade that involves the use of programmable automation controller, distributed input/output, a touchscreen operator interface and features such as data logging and charting to achieve automation. Today, companies are looking out for architectures that would help them instill “smartness” in their plants and be a part of the major industrial revolutions that are just around the corner.

While it can’t be denied that the traditional distributed architecture is necessary, as it has gained its reputation from its reliability and repeated testing, advancements in computing power have made it possible to incorporate all such features into a single powerful device. The concept of all-in-one automation panel not only streamlines system development, communication and maintenance but also brings the plant at par with modern Industrial Internet connectivity. A major attraction for OEMs in such an all-in-one solution is the ability to carry out remote diagnostics and maintenance.

So how can one compare the different technologies and decide which one to adopt?

Furthermore, automation panels can bring down software development costs, as many automation suppliers reap the benefits of shared databases between the PAC and OI panel. When separated devices are used instead of automation panels, they would require separate databases that would be prone to communication errors and unexpected glitches.

An all-in-one automation panel allows logic programs to be flashed through a memory card or USB stick, allowing the end user to carry out quick & planned maintenance activities rather than wasting resources on their preparation.

There is a genuine concern among manufacturers that a malfunction within a touchscreen can result in failure of the entire automation application. However, today’s technology follows a modular approach, and the processor is hardly dependent on an output device to function. Therefore, even if the screen gets damaged, the CPU & IO would continue to work as if everything was normal.

With an all-in-one automation panel, the communication can be speeded up because it would be carried out internally, rather than changing interfaces and protocols externally. Note however that this doesn’t mean that the control system won’t be overshadowed by another process running at a higher priority in the CPU.

The Need for a Separate Controller

Having an all-in-one automation panel may have its advantages, but there are some cases where they would simply not fit.

System Performance is one factor that can play a big role in selecting a separate controller over an all-in-one panel. Most control applications have performance requirements that cannot be met by one processor. In such cases, an all-in-one solution would simply provide degraded performance. But, if a PAC controller is used, it can be deputed specifically for high-performance threads, and upgraded as the demand increases.

High availability is the second factor that may require a separate controller. Systems that need to run 24/7, in a reliable manner require components such as hot-standby, redundant CPUs with synced scans to avoid a speck of failure. For such applications, a PAC controller can provide higher availability and is thus preferable to an all-in-one operator panel.

To discover what improvements your company can make to become more efficient talk to a specialist at PanelShop.com today.

Or call us today and we'll quote you within 48 hours: