The Future of Industrial Automation 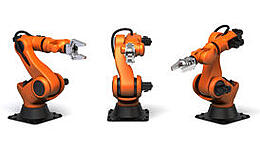 Once the Digital Age hit, technology started to change and grow at exponential levels. New industries were created and the development of new gadgets, programs, and processes were thrown onto center stage. This trend does not seem to be slowing down either. Industrial robotics are commonplace and molecular manipulation is no longer out of the realm of possibilities. Looking at this progress through an industrial lens clearly shows that automation has to continue to evolve as well.

A New Kind of Engineering

To accomplish this, the field of electromechanical engineering has expanded to mechatronics – electromechanics plus computers. It is a field that blurs the lines between separate types of engineering, combining mechanical and electrical, telecommunications, control, and computer engineering. Today, mechatronic principles are used in the production of everything from the smallest push button switch to complex electrical control panels and PLCs.

Also useful to industrial automation is the recent focus on nanotechnology. Arguably the most influential technological development for this century, nanotech has the potential to change everyday life. By manipulating the very matter of an object, materials can be made lighter, stronger, and more quickly produced. In manufacturing, the end goal is to have nanomanufacturing equipment capable of arranging and duplicating atomic structures in order to create products as instantaneously as possible. As manufacturing companies turn to nanotechnology, automation suppliers need to grow availability of nanomanufacturing systems.

Manufacturers are looking for new machine to machine (M2M) systems as well. Wireless communication in between machines has a number of benefits. Real time data can be collected and processed without human interaction, which can subsequently reduce operation costs and improve efficiency. The machines can be connected through a variety of technologies, including cell and satellite networks and over Wi-Fi, but the networks for these machines still need to be improved. The lack of ease of communication in the systems limits the uses of M2M systems, but a demand for compatible machinery is growing. This creates new objectives for the automation industry.

More heavily integrating M2M­ systems also opens the door more widely to fully automated factories. Nicknamed ‘lights out’ factories, the idea of a fully automated factory is to run the production line entirely with robots and machines, eliminating the need for workers on the floor (hence allowing the factory to run with the ‘lights out’). A handful of factories around the world are run completely by robotic automation systems and a larger number have the ability to, but the inflexibility of robots limits their uses.

Currently, many car manufacturing companies are able to utilize a largely automated production system, but for smaller scale companies, the automation required is too costly and not accurate enough. However, the future looks bright for the production of more dexterous, cheaper automation as mechatronics are used more widely and nanotechnology becomes better understood.

You May Also Be Intestested In Reading: