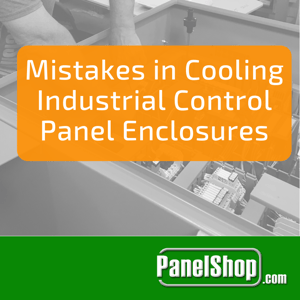 The importance of effective enclosure cooling is often overlooked by industrial control panel designers. This leads to designs that feature natural ventilation with insufficient importance being given to the combined effects of components’ heat load and ambient temperature. As a result, the enclosure fails to maintain the internal temperature at recommended levels. The dangers of unsafe temperature levels are well known, ranging from damage to equipment to shortening the lifetime of components to a full-blown fire. These can be minimized by realizing and subsequently rectifying the mistakes being made in cooling the enclosures.

Why do industrial control panels get hot?

The rate of heat generated inside the panel and the rate at which heat is removed directly impacts the temperature inside an enclosure. The widespread use of electronic and microprocessor-based equipment means control systems give off more heat. The situation is worsened further by the use of electrical drives that are notorious for generating heat. This is combined with the designers’ wish to pack all components within as little space as possible, making a recipe for disaster.

It is not uncommon for industrial equipment to have a range of operating temperatures. Since industrial environments are known to be challenging, manufacturers are sure to provide flexibility in terms of operation, but it varies from component to component. Industrial control panels packed for density can soon accumulate heat that can lead to damage to equipment, especially sensitive ones such as power supplies, controllers and precision measuring devices. There is also a risk of microprocessor-controlled devices such as PLCs to begin to malfunction as temperature crosses a certain threshold.

Quite often the little mistakes are the ones that make the most impact. And mistakes can be costly when it comes to industrial control panels, when they are known to house sensitive equipment such as variable frequency drives, power supplies, transformers, etc. These are expensive, and failure can also cut-down productivity. Furthermore, even if the components lose efficiency or develop faults, entire assembly lines can be affected until rectification takes place.

Generally, manufacturers usually indicate a maximum allowable temperature limit in their product documentation, ranging between 35 – 40 degrees Celsius. This may seem adequate but the heat buildup inside an enclosure results in an even higher temperature. Common examples of when this may occur is when VFDs heat-up or trip, causing full-on plant outages.

The following are three of the most common mistakes, which if rectified can prevent excess downtime and repair costs while improving the equipment’s longevity.

One must understand the industrial environment in which the control panel will be installed. Ambient high and low temperature limits must be known in advance, while other factors that should be taken into consideration include exposure to solar radiation, humidity levels, and presence of pollutants such as dust and dirt. Once known, this information can be used to devise the correct enclosure as per NEMA ratings.

NEMA or National Electrical Manufacturer’s Association is a mature and established regulatory system that has specifications for electrical enclosures for indoor or outdoor operation. Manufacturers usually design their enclosures around NEMA standards. For instance, NEMA 1 enclosures operate indoors in pollution-free environments while NEMA 4 enclosures can protect against all types of weather and water penetrations.

For NEMA 1 and NEMA 3R enclosures, cooling can be maintained through an open-loop cooling system, e.g. filtered fan package, that can prevent temperature from rising above the safe limit. Fans are often the most cost-effective technique of maintaining temperature, given the environmental conditions aren’t hostile. Cooling fans are highly effective for enclosures installed indoors with nominal ambient temperatures, where minimal levels of dirt and dust exist.

On the other hand, if the enclosure is rated at NEMA Type 4, 4x or 12, then a sealed closed-loop cooling system would be required, preventing any pollutant from making contact with the equipment inside.

Many electrical components have the tendency to fail in excessive humidity levels, and at all times must be kept in dry environments to prevent electrical short circuits from happening. High humidity conditions are best tackled by air conditioners that can condense it out of the air. There have been notable advancements in the field, with some enclosure air conditioning system providing dealing with resultant moisture through a condensate evaporator, preventing water from dripping outside the enclosure. At the same time, the air conditioner must not be oversized, as a unit with high cooling capacity will be unable to maintain the desired enclosure air temperature.

In colder environments, water can condense on the equipment whenever temperatures drop below the dew point. In these cases, a heating element must be used to keep the internal temperature above this level.

On the other hand, there are environments that expose enclosures to corrosive fumes and liquids, for instance, in marine areas or water treatment plants. To protect the internal components of the enclosure, it must be sealed so that contaminants can’t penetrate. But, since the liquids are generally corrosive, they can affect the outer casing of the enclosure. To prevent such occurrences, anti-corrosive coatings may be applied to the copper tubing or condenser coils.

Once the type of cooling system and NEMA rating has been decided, the cooling capacity of the enclosure must be chosen correctly. This is an important step as otherwise the components will lose their efficiency and will be at a constant risk of failure.

The cooling capacity of an enclosure must exceed the heat load produced by the components. In order to devise the heat produced, the technical specifications of each component must be referenced. The component’s efficiency must be subtracted from 1, with the result multiplied with the power rating of the device.

Lastly, the heat transferred through the enclosure walls due to the ambient temperature and solar radiation sources must be taken into account while devising the heat load. A digital temperature management calculator is the best way to go about this as it will give you accurate values, allowing you to select the most economical enclosure.

There are a few best practices that can be considered while designing industrial control panels and assessing their cooling needs.

When a thermal management system is designed with long-term considerations, it can provide long-lasting benefits, keeping all electrical components inside the control panel at safe temperature levels. While laying out components with the enclosure, be sure that the sensitive electronics are placed close to the cool air inlet. Room should always be left for future expansion, otherwise the delicate component-density balance will be disrupted, which may result in replacement of the cooling system.

Surely, the components that will be placed inside the enclosure will be responsible for generating the bulk of heat. But the ambient temperatures have a major role to play in terms of cooling of the enclosure. One should be sure to account for all external factors when designing the enclosure:

Installing a control panel and leaving it be isn’t the right way to do things. Ideally, a predictive maintenance mechanism must be in place to provide an operator with all necessary readings and alarms in advance. This will allow plant managers to keep track of maintenance activities and the longevity achieved due to timely repairs.

In the cold winds of winter or the heat of

Many aspects of a manufacturing system have

END_OF_DOCUMENT_TOKEN_TO_BE_REPLACED Any electrical system, no matter how small, will