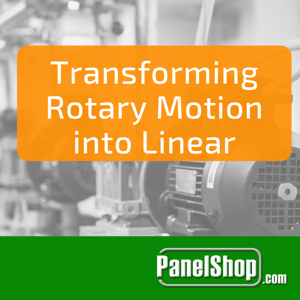 Linear motion is referred to as moving an object in a straight line, typically with a programmed speed and in a specific position. One of the most common linear-motion devices used within industries is a simple pneumatic cylinder. The appliance makes use of the pressure and flow of air within a cylinder to cause linear motion.

The speed at which the cylinder makes an object move remains constant as long as the physical parameter within the environment are constant. The operating temperature, pressure and dynamic frictional coefficients can greatly affect the performance of a pneumatic cylinder and the process being controlled.

The need for highly autonomous and sensitive machinery requires precise speed and position control, for which pneumatic cylinders may not be the best choice due to the hard stops it injects within the length of the motion. A much better solution would be an appliance that has a feed-screw component, which applies a linear force required for the movement along with 1–2 bearings for maintaining the line of motion.

The linear-motion control system may have a mechanical system at its core, but it is becoming increasingly common for them to have an electronics part for processing movement and control commands. A brake may also be used in conjunction with the motion system to prevent unwanted travel of the feed screw.

These are devices that can be used to convert the rotary motion of the motor into linear motion. There are two major types of feed-screws:

The best way to determine the linear-motion device is through the assistance of the manufacturer/vendor as they have a number of tools at their disposal to narrow down the device that fits the best. Parameters that are usually analyzed include acceleration/deceleration rates, distance of movement, weight, and life-span.

A drive motor and the associated controls are then selected to develop the design of the motion stage. The power of the motor is determined by the load’s weight and direction, along with the friction it will encounter. If the motion is fixed and at a certain distance then a general-purpose gear motor is sufficient, without any specific VFD needs. If, however, the motion is variable, then a servo or stepper motor would be required to generate variable speed.

For a motion that has two fixed motions incorporated within it, feedback signals can be generated from sensors, such as proximity, infrared, and pressure. A linear position transducer or feedback can be used to determine the position of the object.