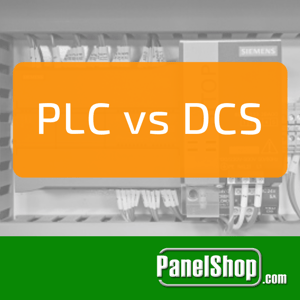 The world of automation has seen several major innovations come its way; some fading away with time, while others turning into prerequisites for operation. PLCs are in the latter category, becoming absolutely vital in many cases for carrying out automation tasks. But in recent decades it has faced competition from an adversary: DCS or Distributed Control System. Much like a PLC, a DCS contains multiple autonomous controllers and serves as a focal point for a vast system’s automating processes.

DCS appeared in the picture at around 1975, a time when PLC was establishing its dominance in the automation sector. The increased use of microcomputers was the driving force behind the creation of DCS. The largest and most obvious benefit of DCS was its ability to control an entire plant through proprietary communications and a distributed system. For instance, if there was a plant that manufactured ice-cream sandwiches, then a single DCS would be responsible for end-to-end preparation processes. One controller would be responsible for the production line, the other autonomous controller would handle refrigeration while another may sever the baking process. This means that in the event that a single controller fails, the rest of the operation continues, leading to a robust system.

In addition, DCS also offer integrated monitoring and control, much like SCADA systems with the entire tag base stored in one repository. Finally, the DCS featured a programming paradigm that was functional, making code reusability possible.

Modern DCSs can be thought of as several PLCs in parallel operation, albeit the integrated monitoring and control. Thanks to open source communications, several PLCs now have the ability to communicate with each other and perform tasks autonomously while coordinating with each other. Developing a DCS through multiple interconnected PLCs has become possible, blurring the line that separates the two entities.

But one major difference between a PLC and DCS comes from the price-point factor. Having a DCS can result in significant cost savings, for a large-scale plant, compared to building a system from scratch through multiple PLCs. Thanks to proprietary protocols, communication is more secure, robust and easier for developers to code. Also, a DCS includes a monitoring and control system, whereas for a PLC-based system, a SCADA system would have to be purchased or developed, further raising the complexity level.

With all that said, DCS does have a few drawbacks, a major one being lacking skillset in the market. Even most floor technicians are aware of ladder logic programming and can perform basic modifications if the need arises. On the other hand, DCS programmers are hard to come by, and even if they do, they are expensive. Therefore, at the end of the day, the choice between DCS and PLC would be entirely dependent on the application and its cost/benefit analyses.