Fundamentals of Integrating vs. Self-Regulating Processes 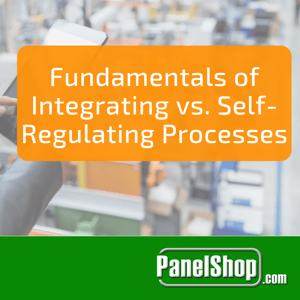 A process that is integrative in nature tends to produce an output that is proportional to the running total of input values that have been accumulated over time. If the input turns negative then the process would bring a proportional decrease in its amplitude, lowering the output. For instance, for a water tank, the input would be the amount of liquid flowing in while the output is the level of water the tank has maintained. As long as the input remains positive, the water level will continue to rise, but when the input becomes negative (more outflow than inflow), the output level will go down.

All integrating processes behave in this way. Inputs are accumulated and dispersed to the surrounding environments. The rate at which these two processes occur depend on the machine being controlled as well as physical factors such as friction, drag and inertia. But once an input is added into the system, it exists until a negative value cancels it.

Consider a leaky water tank. It will continue to lose water irrespective of what the input is. Similarly, a servo motor that rotates against a torsional spring will continue to lose position no matter what the value of the voltage is. Such processes can reach an equilibrium point where additions can be offset by unpredictable losses. For instance, it would be impossible for a tank with several leaks to have an output level beyond a certain point. These processes are non-integrative, accumulating their inputs but only reaching a certain point that is an equilibrium between the inflow and outflow.

It must be noted that there are only some integrating processes that do not possess spontaneous losses, while some non-integrating processes have a fairly long time-constants, making it difficult for them to reach the equilibrium point. This blurs the line between the two.

A control engineer’s job is to identify the nature of the process and to which end of the spectrum it belongs to. This allows him/her to choose a control strategy suitable to the process. Regulating a non-integrating process is easier as the equilibrium point imposes a natural limit on the output. The controller doesn’t have to go through the tedious process of finding the right input.

It is for this reason that non-integrating processes are sometimes called self-regulating due to their ability to achieve a steady state without the need for intervention from the controller. Nonetheless, a feedback controller’s efforts are still required to increase/decrease the process’s input if need arises.

Traditional PI and PID controllers are designed to work with both integrating and self-regulating processes; the configuration however, does differ. Most tuning rules take into account both these processes, providing formulas through which the controller’s P, I and D parameters can be calculated.

Sometimes, even a simple P-controller can fulfill the requirements of an integrating process due to the accumulation that goes on. This gives the controller the same characteristics as the integrator in a PI or PID controller. Also, if the controller’s goal is to identify the magnitude of input required to force the output to match a specific setpoint, then a P-controller is well-suited.

The same cannot be said for non-integrating processes as a P-controller may give up before the output approaches the setpoint. This will lead to a steady-state error that would maintain itself even if the controller tries to compensate for the load disturbance. These errors can also effect integrating processes and are due to physical parameters such as varying density of fluid.