What is Net Metering? 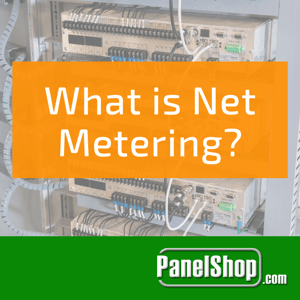 Net Metering is the next step that allows the utilization of these distributed sources of generation by the grid at large. The concept is simply a billing arrangement under which solar panel owners are offered compensation for the energy their solar panels produce and transfer to the grid. For instance, if a residential unit’s solar panels produced 10kWh and sent them over to the grid during the day, it will not be charged for extracting 10kWh of power from the grid during some other time.

But it’s not as simple as it sounds as there are a lot of factors, rules and regulations involved in the concept’s implementation.

In the United States, net metering has widely been adopted as the default billing arrangement for PV owners. A particular arrangement is as follows: your solar panels supply the grid with 10kWH electricity during the day, and you get to use 10kWH free of cost during the night. This is beneficial to the consumer as when electricity is credited at wholesale rates, the renumeration is often 25% of the retail price at which electricity is bought by him/her.

As of now, 38 states in the continental United States follow a decent net metering policy while 3 are in the final phases of its implementation.

Solar Panel owners may emerge as the biggest beneficiaries to such a scheme however, in reality all aspects of the electricity infrastructure are impacted positively. Even if the electricity generated by the solar panels isn’t always transferred to the grid, it is utilized locally, by the residential unit, thus, lowering the stress on the grid. In effect, wide-scale roof mounted solar panels installations increase the overall generation capacity of the grid and make it less prone to brownouts or blackouts.

During peak load times during the day, the solar power generated by a certain locality may be utilized to feed the rising demand. This eliminates the need for always-online spinning reserves that are expensive to run and maintain. In the long-run, these spinning reserves, i.e. power plants, can completely be replaced by consumer owned solar panels-battery bank combination, lowering the overall retail tariff, benefiting all.

Net Metering is clouded by controversies throughout several states in the USA simply because the concept seems to be taking off as solar panel prices continue to drop. For the past several years, there have been lobbying efforts by enterprises that own conventional power plants as the prospects of a consumer-oriented grid harms their profits. For instance, in 2015, Nevada reverted its net metering rules eliminating it from the state and introducing new rates at which solar power may be bought. The reasons for the legislation were multiple but the end result was loss of 5000 jobs as several solar companies shut down their operations in the state.

As stated earlier, if wholesale tariff was to take over net metering then consumers would be paid less for electricity generated by their panels. This means they would be able to consume a lesser amount of energy than what they have supplied to the grid.

The following chart shows the inverse relation between the price of solar panels and generation capacity over the years:

There was a time when price of solar panel installations simply didn’t provide an attractive enough Return on Investment. Today, even after tax credits and rebates, solar is competing head to head, and faring better than conventional fossil-fired power plants, benefiting owners with thousands of dollars over their equipment’s lifespan. Net Metering provides an effective way to promote the spread of a clean and renewable source of energy that would benefit all aspects of the society in the long run. Lobby groups may be able to suppress the movement for a short period of time, but the advent of concepts such as Microgrids, Demand Management and Distributed Generation would only lead to widespread implementations of the energy source, advocating the need for Net Metering or a scheme with similar benefits.