OEE stands for Overall Equipment Effectiveness.  It is a measure in percentage of how well a production machine is utilized over a period of time.  A rating of 100% means that a machine never breaks down, never runs slower than target time, and never produces a bad part.  Although this is the goal, no machine is perfect, but having a way to measure how a machine performs gives us a way to determine whether changes to a machine are beneficial or not.

How is OEE calculated?

OEE is the result of: Availability % x  Performance % x  Quality %

Availability is the percentage of time that a machine is available to produce during the measured period.

For example, if a shift is 7 AM to 3 PM with a half hour lunch and two fifteen minute breaks, then there are 7 hours, or 420 minutes, available during that shift.  If the machine was actually running 315 minutes during this shift (downtime of 105 minutes) then availability is 75%. The machine was available to produce 75% of the time.

Next is performance.  First a target time needs to be decided on.  This should be how fast a single part can be produced on the machine based on the largest limiting factor of the process.

For example, if a plastic part is being extruded, the part is 3 pounds per piece and the extruder can only pass 3 pounds per minute at maximum speed, then the target would be 1 minute per piece.  So, taking our first example of availability where we ran for 315 minutes during the shift, for a rating of 100% performance we would need to produce 315 parts at 1 minute a piece during this time period.  Lets say we produced 300 parts.  Then 300 divided by 315 gives us a 95% performance rate.

Last, there is quality.  The quality percentage is how many acceptable parts were produced out of the total produced on the machine.  Again, continuing with the previous examples, if every one of the 300 parts we produced was acceptable then we would get a 100% quality rate.

Putting it all Together

Sounds low, doesn't it?  The machine performed at a decent rate, quality was 9 out of 10, and we were available most of the day but together it tells a different story.  We only produced two-thirds of the parts on this machine as we expected to and we also had some waste due to quality problems.  Now we have something to work on and improve.

Keep track of all data for the long term.  Compare month to month, shift to shift and so on.  Does one shift perform consistently better than another?  Maybe they do something that the other shifts don't do, such as a different tooling change or better trained operators.  Does the machine perform notably better in the summer than the winter?  We'll maybe it would then be better to take the two week maintenance outage during the winter months to make yearly repairs on the machine instead of in the summer.  In the end, tracking OEE on a machine is not a tool that is going to make a machine produce more or run better, but is instead a way to determine which of your tools are working and which ones are not.

END_OF_DOCUMENT_TOKEN_TO_BE_REPLACED 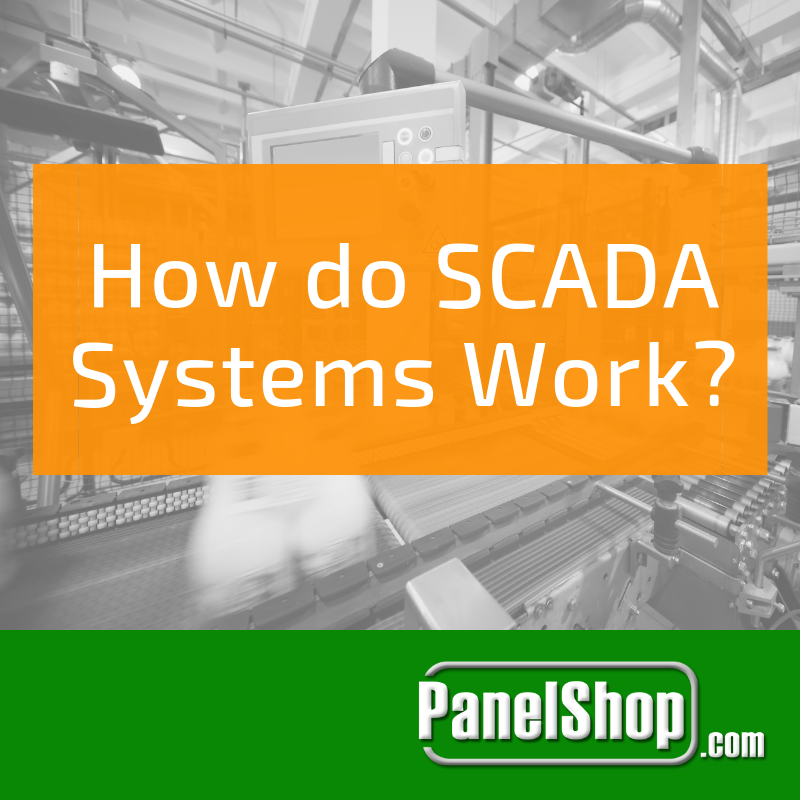 How do SCADA Systems Work?
by PanelShop.com Aug 8, 2019 HMI Panels

SCADA may be one of the most used acronyms in the